This is Lane 9 Project’s first anonymous essay contribution. We know that recovery looks and feels different for each of us, and words can be powerful healers. So we welcome all forms of expression, story-telling, and connecting. If you want to share, anonymously or otherwise, we want to help.

Ugly, unwanted, different, boring. These negative ruminations plagued my consciousness throughout childhood and still manage to creep in today. Feelings of worthlessness leave me grasping for something to feel proud of. Sometime around my senior year in college I found a proxy: food restriction. It became a game: how long can I stick to my calorie goal and still stave off the hunger pangs? It was a game I was good at; in a few short months I dropped two pant sizes. Initially, I felt light, free, and proud of what I had done. I felt excited, invigorated (apparently, calorie restriction can initially lead to a sort of “buzz” feeling that is reinforcing). I also had something concrete and measurable I could focus on daily: did I meet my goals? Check! Good job! This ritual became my best friend, until it became my worst enemy.

This ritual became my best friend, until it became my worst enemy.

After a year or so of restriction, I began to binge.

For the next few years, I would battle my urges to restrict and binge, my eating disorder plaguing my thoughts. I was everything I feared in my internal dialogue — my interests and spirit were gone. I became a shell of a person. After a particularly grueling binge in front of my husband, I made a commitment to give recovery a shot. I had already lost myself, and I was at the precipice of losing him, too.

Recovery has had its ups and downs — literally and figuratively.

Better nutrition meant I was once again able to concentrate on intellectual pursuits, hobbies, and work. Towards the beginning of my recovery, I noticed friends of mine running 5Ks and 10Ks. They looked so proud, strong, and most of all, they looked like they were having fun. I decided to give it a shot and try my first 5K (since middle school) in July of 2012.

In those moments of running hard, I was free.

I remember pushing through the final mile in the heat and thinking this was one of the hardest things I’ve ever done, but I made it! In those moments of running hard, I was free. I was focused on being strong, persevering, and believing in myself. I was proud of my body at that moment, and that feeling was new. 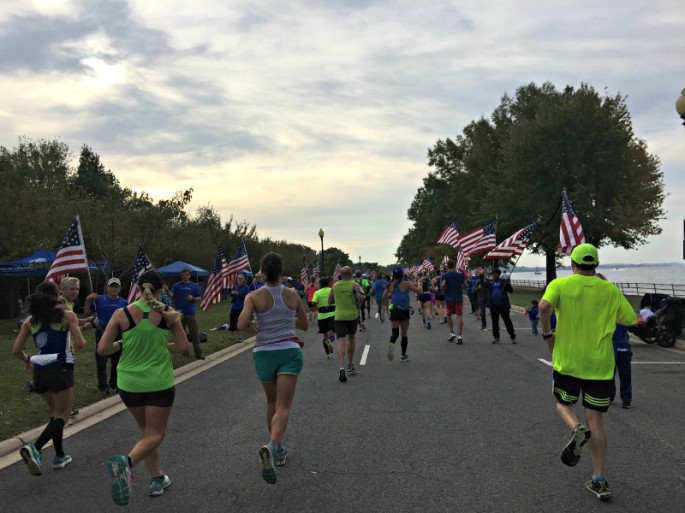 I tried a few more races over the next few years, and each time I got faster and faster. What a joy! I still wasn’t quite at my ideal weight yet, so my success was tempered by my physiology. Like many that struggle with disordered eating, I had terrible IBS. The first time I tried a 10K, I had to quit and get picked up in the middle of the race by the medics. It would take me over a year (and some more weight gain) to try that distance again.

Running makes me proud, not thin.

We are all subject to the “thin = fast” mantra that is promoted by the sport. That has NEVER worked out for me. As I became healthier and gained mass, I also got faster. My 5K and 10K times were dropping by the minute. I also moved to Seattle and joined a running group. The joy of running with others brought me to new distances — half-marathons, marathons, ultras.

I feel at peace. I feel free, connected to my surroundings, and in the moment.

Not being an athlete in high school, I would have NEVER guessed that I would be strong enough to finish any of those distances, nor guessed I’d be capable of running in the Boston Marathon! Each time I’m on a long run, I feel at peace. I feel free, connected to my surroundings, and in the moment. I want to nourish and protect that strong feeling, I know now this means that I have to fuel properly.

I still go through periods of under-fueling and binging. Having a disordered eating pattern for so long means that I have to re-learn hunger cues, and I work with a dietitian for this. Also, my IBS continues to plague me. A nasty (literally) consequence of disordered eating is that the GI symptoms can continue to persist, even after weight recovery. It’s frustrating, but I accept it. Proper fueling makes the symptoms less severe.

I still have to fight that voice that tells me that I’m going to “lose control,” to go back to restricting, and to not love what my body as it is. I’m still embarrassed to take my shirt off because I don’t have a perfectly “elite” body. I’m not body-positive, and I wish I could be. (To those women who are — please keep promoting health and love at every size! It’s so inspiring!) I want to scream when I see the effusive praise placed upon weight loss. “I want to feel special too!” “Let me join in!” But I can’t. I will lose running, and most importantly risk losing myself again. Running provides a check against this — it has taught me that the closer I get to that “more ideal” body (i.e., if I start to lose weight again), the worse my running gets.

My body isn’t the prototype ideal, but it is be strong and capable.

I’m still working on accepting this. Why do I feel pressure to conform to that standard in the first place?! Fortunately, I’ve been surrounded by other amazing role models who encourage me to keep striving to accept who I am. Individuals who are strong, capable, confident, and come in ALL shapes and sizes. What does an athlete look like? Just like me and you!

If you’re an active lady or lady health activist, coach, mentor, parent, or healthcare provider, get in touch through the Lane 9 Project community form. If you just want to follow along, stay tuned here and say hi 👋 on Twitter, Instagram, or Facebook.