Amelia Boone, multi-time obstacle course world champion has just left treatment and gone public about her twenty-year battle with an eating disorder. She has broken four bones in the last three years. In 2018, Hannah Fields, professional middle-distance runner for Brooks, took a three-month hiatus from training to receive treatment for her eating disorder. When Sarah Sellers took second place at the 2018 Boston Marathon, Americans wondered how this woman had appeared out of nowhere. She hadn’t. She was once a standout Division I runner who had stopped running after restrictive eating led to several stress fractures. Mary Cain, once deemed “the fastest girl in America,” recently publicized the abuse she received from Nike coaches—the forced weight loss that resulted in the destruction of her physical and mental wellbeing.

It’s the dirty little secret of women’s distance running—perhaps not so secret anymore: eating disorder culture runs rampant. In 2007, the Norwegian School of Sports Science found that, in sports that emphasize leanness, 47% of female elite athletes had clinically diagnosed eating disorders. But it’s not just the product of abusive coaches or Nike’s unmatched power. In reality, eating disorder culture saturates all types of running programs and all levels of the sport.

Still, many coaches and athletes hold inadequate understandings of what eating disorders truly are—mental illnesses that arise from a combination of factors, including genetic predisposition. Unfortunately, athletes’ eating disorders are often treated as purely weight loss problems or food issues, and a condition they have chosen. Yet, someone who has developed an eating disorder may not notice their own warning signs until the illness has taken complete control of their mind. For the many female runners who struggle with eating disorders, obsessive thoughts and anxiety remain long after a healthy weight has been restored. Perhaps most striking, eating disorders rank second only to opioid addictions as the mental health disorders with the highest mortality rates.

When I began running Division III cross country in the fall of 2014, I was entirely burnt out from my high school running experience. Throughout high school, I had watched myself gain weight and become slower—an experience familiar to many young, female runners. Unable to perform at my previous level, I carried a deep sense of shame that at times spiraled into depression. Most of all, I felt confused. No one ever explained to me that this was a natural experience for female athletes during puberty, and that if I stuck it out the healthy way, and didn’t fight the changes, I would eventually run fast again. 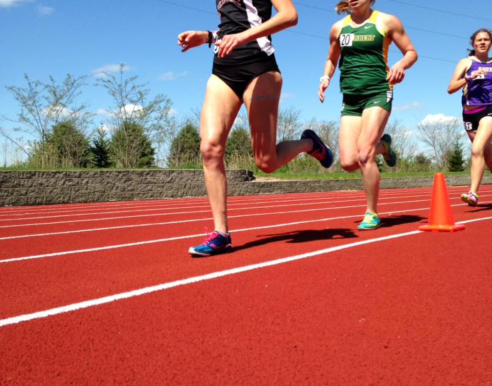 Over 1,000 miles from my Connecticut town, at a college in the middle of Iowa, I was ready for a new start. While I had always enjoyed eating “healthy”, in college I could make all food decisions for myself. What started as balanced choices, quickly turned into majority vegetables, which quickly turned into only vegetables and protein, which quickly turned into no starches and absolutely no added sugars. As my training grew harder, my times got faster, my eating habits grew increasingly regimented, and I grew skinnier and skinnier. By my second year of college, I had lost significant weight on an already thin frame.

At the same time, obsession ruled my daytime hours, as well as the many nighttime hours when I lay awake and stared at the ceiling, thinking of my morning alarm, crunch, stretch, blend kale and protein smoothie, walk to class, morning routine. Despite the concerns of my family and friends, I convinced myself I didn’t have a problem. How could I? On the surface, I was doing well—a straight-A student and the first scoring runner on my team. I was running times I had never dreamed of in high school. Still, the disorder took over my mind until I believed overwhelming anxiety and obsession were inherent to my success.

By the last races of my second-year cross country and indoor track seasons, my body had reached a depraved state. I found myself sick with viruses, each lasting two weeks as I

refused to eat better or lighten up on training. At the indoor track conference meet, I ran the slowest 5k I had run since high school before collapsing on the side of the track. I was supposed to double in the 3k that weekend, but my coaches gave my bib to a teammate instead. I was in no position to race.

My eating disorder ebbed and flowed throughout college. But I could always feel it under the surface, lying in wait for the next opportunity where I could pull it out and use it to cope with whatever stressor confronted me. Throughout this time, I held a deep fear that I would be responsible for a culture of eating disorders on my team. If another teammate—predisposed to mental illness—saw my success, would it throw her into obsession too? Would she believe she must be skinny to run fast? 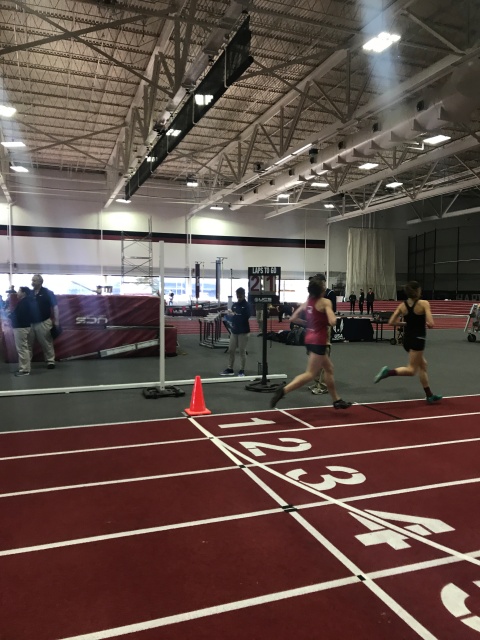 I opted out of my third-year track season to spend spring semester abroad in Costa Rica. But, in this faraway country, I had no 7am lift, no smoothie blender, no dining hall, and no 4:30pm practice. Instead, a heavy pit surfaced deep inside my stomach—the fear that I would gain weight, lose fitness, and slow down before my senior year. In San José, my host mom cooked me mixed rice and beans with eggs for breakfast each day. I would slowly eat the eggs and pick at the beans, asserting how much I appreciated the meal—Que rico, muchas gracias, Mamá– I’d swirl the rice around my plate, separating it from the beans. As soon as she left the room, I would run to the trash can, throw the rice inside, and cover it with my napkin. My host mom, a single parent with three kids, worked late into the night to provide the rice and beans on my plate. Cuidado, mi amor. Qué Diós te acompañe (Careful, my love. May God go with you.)—she’d call from the other room as I headed off to class. My life was the most regimented it had ever been, but I had never felt more like an animal.

When I returned to Iowa that summer, I wanted to change. I began to see a therapist once a week. At that point, I would have qualified for inpatient eating disorder treatment. But it was my senior year of college, and I had goals, both academic and athletic. Plus, I had been an All-Region cross country athlete the year before, and I wanted to give myself the best chance at qualifying for Nationals. By graduation, I was eating a more balanced and caloric diet, felt happier, looked healthier, and was still running fast—faster than I ever had, in fact. I told myself that I had outgrown my eating disorder with minimal external help.

But there’s another, even less glamorous side of eating disorders. Years of under-nourishment will cause your body to operate in a famine state, flooding your mind with cravings of tremendous rigor. I had operated on rules and regiments, ignoring my hunger cues for years, so I lost all ability to recognize the sensations of hunger or fullness. The year after graduating college, I would eat mostly vegetables and protein all day and feel full, but at night, I wouldn’t be able to stop eating until I felt sick. I would wake in the middle of the night with severe hunger pangs. I would plead with myself—it’s all in your head, just go to sleep. Still, I could not fall back asleep until I had eaten whatever food consumed my thoughts.

By the summer of 2019, I realized I was not okay. I was not recovered. I did not want my eating disorder to run and return for the rest of my life; disguised with a new mask at every turn. Over a year after graduating from college, and in a body that appeared “healthy”, I decided to finally enter a treatment program. My treatment center north of Chicago was not focused on athletes.  Still, at one point there were ten women and girls in my program, and four of us were competitive runners.

To be clear, my college coaches in no way fostered or fueled my eating disorder. In fact, my coaches nurtured an atmosphere of balance and body positivity all-too rare in this damaged sport. My cross country coach communicated honestly with both me and my parents whenever she was concerned about my health. She would not only speak of the importance of nutrition but would take us out for pre-season ice-cream sundaes and share her favorite monster cookie recipe. She often verbalized the importance of body diversity on the cross country team.

When I was particularly frail my second year, my track coach would not let me start a workout until I had listed all that I had eaten that day and assured him it was more than sufficient. They–and many people around me–tried their best with the information they had, which was limited, given the inadequate educational resources on eating disorders and their taboo connotations.

Importantly, many athletes’ eating disorders don’t fit the criteria for standard anorexia or bulimia. Yet, female athletes’ with restrictive eating of any sort are at risk for RED-S (Relative Energy Deficiency in Sports) Syndrome, characterized by insufficient input to match output energy, a lost period, and low estrogen leading to decreased bone health. The results, including stress fractures, osteoporosis, and even decreased fertility and heart disease, can last long after adequate energy levels have been restored. I’ve endured four bone injuries, two occurring after I gained back the weight lost as a college athlete. I may not know all the effects that are yet to arise. Do I have more bones to break? If I want to have kids one day, will I be able to?

The fact that I—a Division III athlete with the most loving and nurturing coaches imaginable—could fall victim to a life-damaging eating disorder shows just how powerful the negative culture of female distance running is. Yet, women haven’t been distance runners for that long—the first woman to run the Boston Marathon is in her early seventies today. Perhaps, this lack of precedent feeds the problem; the unique biological needs of women are not given equal weight. Women are powerful. But if we train young women and girls like we train men, and expect their bodies to appear like men’s bodies, we ignore their unique biology and trigger long-term health consequences.

It’s time we treat the culture of eating disorders in female runners like the widespread epidemic that it is. Mary Cain has called for the take-down of Nike and the systematic abuse evident at the professional level. I applaud her bravery in sharing her story and agree that Nike’s relentless power must be fought. But I don’t think taking down Nike will solve the national crisis—the destruction of female athletes’ physical and mental states that occurs at all levels of the sport, and even in the absence of abusive coaches. 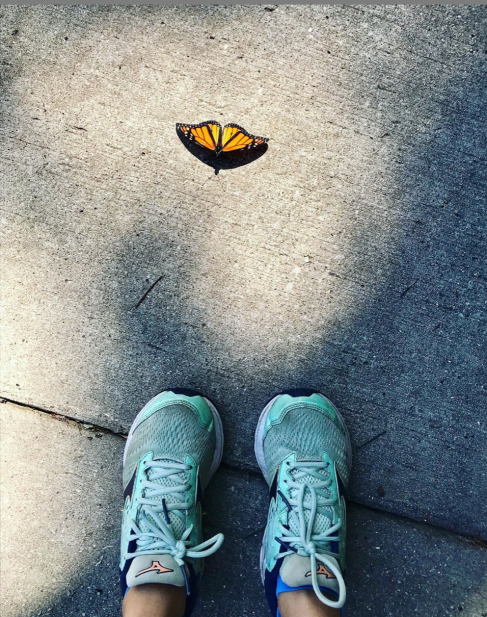 We must reform the culture of women’s distance running. We must give coaches and athletes at all levels the comprehensive education to prevent and intervene in eating disorders. We must educate girls on sports nutrition, mental health, and balanced mindsets as early as high school. We must treat eating disorders as not just weight-loss or disordered eating patterns, but as mental illnesses.

Professional athletes are calling for a systematic change in the governing body of Track and Field. I am calling for that and more. If we truly love this sport and want it to prove sustainable for the women and girls that follow us, we must learn from the Mary Cain’s, from the Amelia Boone’s, and from ourselves. We must learn from that little girl we once were who just wanted to run fast. For her, we must go all in.

Contribute your essay, or share your story, with Lane 9 Project.